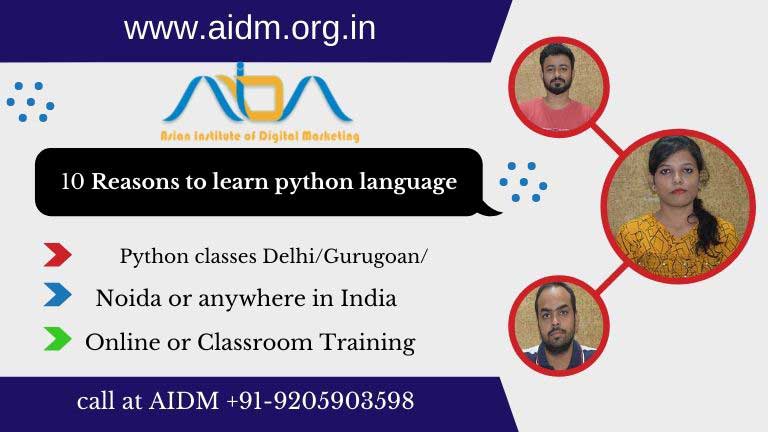 Python is a highly demanded programing language in the world, whether it is data science, coding or app development, you can find it everywhere. Because of its versatility, it has become more popular in the recent scenario. Having a huge demand in large organizations and multinational companies, many educational institutes have started a training program to balance the demand and supply ratio. You can check the popularity of this language by searching in Google search box Python course near me or in Delhi/Gurgaon/ Noida or anywhere in India to see the opportunities to learn it. But before joining any institute or engaging with any online course, you should have a clear mindset to why you have to learn this language.

It is simpler than any other languages

Python is the preferred choice for the developers who are at the beginning level in this IT industry, because of its simplicity. The simple syntax of python is the same as English. Easy to understand structures, easy to learn its programming which makes it highly readable and set it as beginner-friendly language. Its learning curve is way simpler than any other languages like C, C++ & Java. So a new programmer can easily grasp its essence without going into complex code and structures.

It is highly flexible and extensible

The thing which makes python scalable and flexible is that it allows you to perform cross-language operations without any panic. It permits you to integrate Java and .NET components with its extensive C/C++ libraries. Apart from this, it also supports all modern platform like Windows, Mac, Linux, Solaris etc

Huge library to fulfil every need.

No other programming language has an enormous library as python. Thanks to its vast collection which having SciPy, NumPy, Matplotlib, Scikit Learn, Pandas, statsmodels and much more. With all these libraries, the functionality of Python is increased and its capabilities get multiplied

NumPy is the most famous libraries by which high-level mathematical operations and multidimensional arrays performed. It is the best choice for scientific computing. SciPy also comes to the famous libraries of python and it is almost equivalent of NumPy which has everything a programmer needs to perform numerical integration and analysis of scientific data.

Having knowledge of Python language, the web development process becomes much easier than before. As it comes with a variety of frameworks like Django, Flask, TurboGears, Pyramid, Web2Py, CherryPy, Hug, FastAPI and many more. All these frameworks of python help a developer to write a suitable code with speed and effectiveness. These frameworks automate the implementation of common solution by reducing the precious time of a python developer. As it lots of time then a programmer can easily think for other critical elements like application logic.

Django is the famous framework of Python, a developer or a student can develop his/her expertise particular in this framework or he/she can learn it for their career growth. A candidate from the national capital of India can easily find the Django course in Delhi and can directly join AIDM which provide the best Python Training Institute in Delhi.

Yes, it helps to visualize the data. It has a collection of various functions which make visualization of data easy. The important tools with can be used to visualize the data are Matplotlib, Plotly, Seaborn, Bokeh, Pygal, Altair, Gleam, Missingno etc. All these tools help a Python developer in sensing the complex datasets before its execution. Apart from this, it also provides the facility to visualize various data representations like graphs, pie charts, web-ready interactive plots and much more.

Python has a set of testing frameworks

As we have mentioned above, a Python developer has a lot to do here. It comprises several built-in testing frameworks that help in debugging the code. It is compatible with both cross-platform and cross-browser testing with PyTest and robot types of frameworks. It also has testing frameworks like Behave, Lettuce and UnitTest.

Python is fabulous for EAI, it can be embedded in applications with ease. Python not only invokes CORBA/COM elements but also invoke call from Java, C, or C++ directly. The feature of language integration with Java, C, or C++ makes it perfect for application codding. Its processing and integration functionalities are highly in demand which can be used for developing GUI and desktop software as well.

Features of Pythons are great for scripting

Python has its worldwide community

As its functionality makes it dynamic which results that it has huge community across the world. In case you are facing any coding related problems in Python, you can find help from this community and it is very reliable also. Because it is an open-source language every day new progress is made and discussed deeply in the community members so for the all the Python developers and coders, they can learn a lot of new things about the frameworks, new tools from its community. Joining a community can help you to learn next level of machine learning and python language from basic to advance

Having Python language skills, anyone can lead to a high salary in the IT Industry. As it is dominating in the development and Data science fields it promises a high salary package depending upon your experience and skills set.

Python has emerged as the most demandable programming language in the industry and you can take advantage of this opportunity by joining AIDM which is the best Python Institute in Laxmi Nagar Delhi and can get the guidance of its professional trainers.

Recommended blogs for you:

Why is learning python for Data Science important?
Whats skills make you a Good Data Scientist?