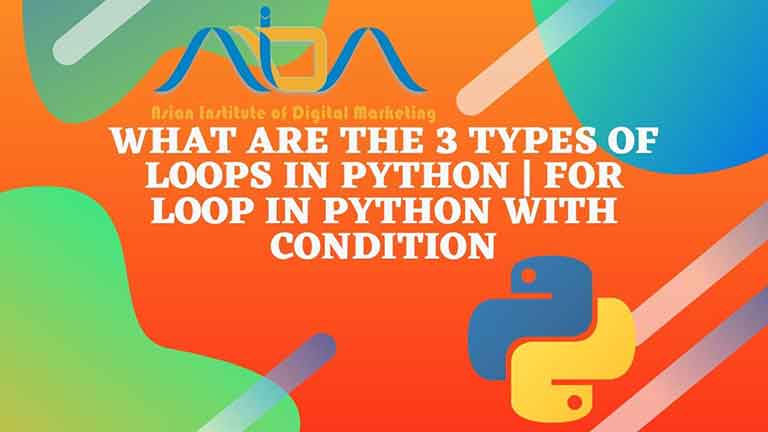 Being one of the best python training institutes in Delhi, AIDM has always innovated its method of delivering the knowledge to its students or its view on the online platforms.

This tutorial contains in-depth knowledge of Loops in python.

Usually, statements are executed in a sequential way then loop is required. The first statement in function is executed first, then second and so on. There may be situations while coding in python, you will require to execute a block of code several times. To fulfill the need of that situation, you will require a loop function.

Join our online & offline python training in Delhi to become an expert in this field.

The Python programming language provides various structures that allow it to execute complicated paths. A loop statement helps you to execute a single statement of a group of statements multiple times.

Three types of loops in python programming language are

For loop allows a programmer to execute a sequence of statements several times, it abbreviates the code which helps to manage loop variables.

for val in sequence:

Here’s its flow chart, which will give you an idea about how it gets implemented.

If a sequence has a list of expressions, it is evaluated first. After this, the first item in the sequence is assigned to iterate with a value “iterating_var”. Next the block containing statements will be executed.

Now, each item in the list will be assigned to iterating_var and block having statements will be executed in the next step until the entire sequence is exhausted.

The above code will result the output, which are shown below

To boost your career as a python developer, you can join the best python training institute in Delhi.

For loop using else statement

Below example illustrates the use of else statements with for loops that search for prime numbers from 10 to 20.

break #to move to the next number, the #first FOR

print num, ‘is a prime number’

This output will be shown if the above code is executed properly.

11 is a prime number

13 is a prime number

17 is a prime number

19 is a prime number

While loop allows a programmer to repeat a single statement or a group of statements for TRUE condition. It verifies the condition before executing the loop.

Here, in the place of statements, it may be possible there is a single statement or a block of statements. The condition may contain any expression and it can be true for any non zero value. The loop will iterate every time when the value is found true. If the condition is found false, the program will follow the immediate next line of the loop.

In python programming language, all the statements are indebted by the same number of character space while writing a code for a single block. It always uses the method of indentation as a grouping statement.

Here is the important point of the while loop, which shows that the loop might not ever run. When the condition is found false, the loop body will be skipped and the statement of while loop will be implemented.

print ‘The count is:’, count

Here the block which consists of the print and increment statements, is iterated until the count is no longer less than 9. With each execution, the current of the index count is increased by 1.

Join our online & offline PHP training in Delhi and Artificial Intelligence course in Delhi to become an expert in this field.

An infinite loop may be valuable in client/server programming where the server needs to run persistently so client programs can speak with it as and when required.

Enter a number between :Traceback (most recent call last):

The iteration in the above example will not stop unless you do not exit the program by pressing CTRL+C command.

Keep yourself updated with our python online course and you can also join AIDM – the best python training institute in Delhi to get physical classes under the guidance of industry experts.

Nested loop allows a programmer to use one or more loops inside any other for or while loop etc.

You can put any type of loop inside of any other type of loop using the nested loop. For example For loop can be inserted in while loop or vice versa.

Conclusion: This is all about the three types of loops used in python programming language. If you want to explore more, you can join our online & offline courses at AIDM, which is one of the best python training institutes in Laxmi nagar Delhi.

How to use lambda function in python