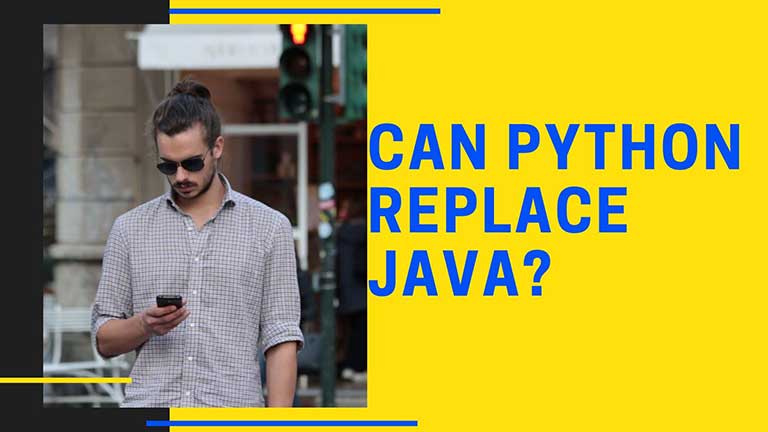 Yes! Python can replace Java technology but that doesn’t mean that java will be vanished completely from the industry. But there is a huge possibility that python can become the number 1 choice for programmers and developers.

But all the reports have shown that python is growing with lightning speed as compared to the other language and the use of Java has been decreasing in recent years.

After analysing the trend of past years, we have found that the trend off Python in continuously increasing, simultaneously the data shows that the demand for Java candidates has decreased. But it is too early to predict anything about the programming languages because Java has been using by major IT companies and lots of Giant websites have used it.

But according to the IT industry trends, the popularity of python is more than in the current scenario.

So it becomes very essential to understand the difference between the two most popular language.

Difference between Java and Python

Java and Python, both are general-purpose programming languages and both are very popular in the IT industry.

Java developers need to write long code to achieve common programming task and they have to put extra time & effort to organize, update and maintain the code.

While on the other hand, Python allows the developers to accomplish a similar task without writing long code as java requires. Its codes can be further emphasized on reusable and readable code generation.

So the python codes are easy to maintain and update from its codebase.

Difference between versions of Java & Python

The authorities of both the language have been provided regular updates to cater the users with the best experience. The programmers of java can use Java 8 to explore new features in including lambda expression, a new functional interface and a new date/time API.

If the java users want to switch from Java 7 to Java 8, they can easily perform this task without any hassle.

While in case of python, developers often find it hard to switch from python 2.x to python 3.x because both the versions are maintaining parallel, hence switching from version 2 to version 3 is a little bit challenging.

Java makes it simpler for software engineers to make convenient cross-platform applications. These applications can run on any gadget on which Java virtual machine (JVM) is running.

Then again, the engineers need to utilize a Python compiler to change over the code written in Python into code justifiable by the particular working framework.

As JVM is introduced on numerous devices, the designers can run Java applications on different devices without requiring any specific tools and compilers.

The speed and performance of both the programming languages may differ as per its use. There are a lot of users who says that Java faster than python.

As it can not be utilised for achieving CPU-intensive tasks but there are various options which a developer can choose to boost the speed while using python like they can replace python’s default runtime with Cython, CPython, PyPy to execute the task speedily.

On the other hand speed of java applications can be easily optimized without using any additional tool.

Get the opportunity to make your career as a python developer. You can join the best python training institute in Laxmi Nagar Delhi.

Which one is best for App development

Java is widely used and popular for developing mobile applications. We all know that worlds most popular operating system “ANDROID” is based on java technology.

It has a huge number of standard libraries and framework which can be used to make applications for giant companies.

But with the use of Java technology, they can save their time and efforts.

Reason for becoming the python language gaining popularity is its simplicity. That means writing a code in python language is similar to writing in the English language.

Also, it has a huge community across the world, the developers can rectify any issue by asking queries in those groups where a lot of experts are available to answer your queries.

These are the reasons for the popularity of the python language. It has become the choice of present trending technology demand. Like Web development, infrastructure automation, mobile testing, software testing, big data an Hadoop, cloud computing (OpenStack, Google Cloud, Oracle Cloud etc)

According to the experts, if the current trend continue then python language will become the most popular and widely used programming language in the IT industry within the next 3 to 5 years. If you want to make career in this technology, so enrol yourself in the best Python course in Laxmi Nagar Delhi.

Recommended Blog For You:

Difference between for & while loop in python