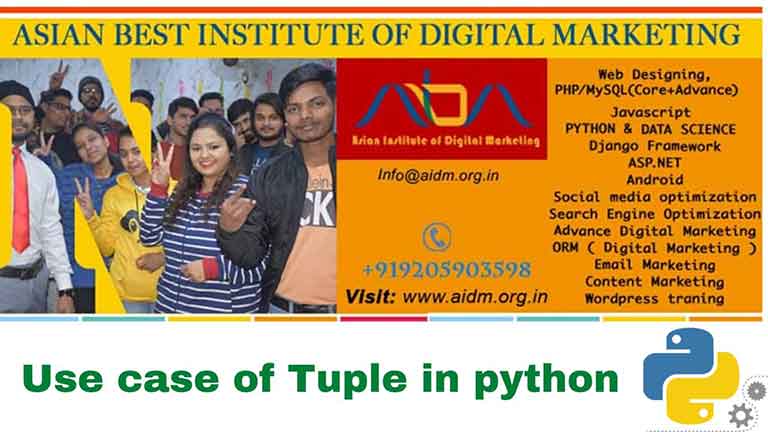 In this post, we will discuss tuple in python and the difference in tuple and list with elaborated examples. And the information provided in this post is based on the research done by the professionals who have experience of preparing the best python course in Delhi.

There are four collection data types in python, which are mentioned below:

Int this post, we will see an in-depth look at tuple in python and its other operations. Don’t miss it and read all the python tutorial post by AIDM which is one the best python training institute in Delhi.

A tuple is data structure like an array, which is used to store multiple data at once. If you have a basic understanding of programming languages like C, C++ and Java, then you will be familiar with this term and its concepts. If you have an idea of the array then it will be easy to understand the concept of Tuple.

As we discussed above, a tuple is a data structure which allows storing multiple data at a single time. When you store data in a tuple, it is kind of heterogeneous which make it the most powerful feature of python programming language.

Use case of tuple in python part-1

Tuple allows a python developer to store multiple data like string, integers, strings, Objects in a single tuple. A tuple is permanent in python thus it can not be changed once you assigned it.

Nurture your career in python industry by joining python training institute in Delhi.

Use case of tuple in python part-2

The list is mutable in python that means it be changed any time, whereas Tuple is immutable.

When it comes to store the data, tuple allows a few features in python but as a tuple is immutable, it gives high performance. Tuple allows faster iterating compare to the list.

Make all your concept strong under the guidance of experts of the best python training institute in Laxmi Nagar Delhi.

The list is mutable in nature, that means it can be changed or modified after creating it. Whereas tuple is permanent means, once it gets created, you can not change it, in other,  can not be modified once it created.

TypeError: ‘tuple’ object does not support the item containing in the assignment.

Use case of tuple in python part-3

After watching the behaviour of both list & tuple, it might seem that lists can replace tuple, but tuples are most useful data structure in python.

Some important cases to remember while using tuples and lists are

So this all about tuple and list ina python programming language, if you are thinking that it is a niche in which you can show your potential then become an expert by learning from experts of AIDM – the best python training institute in Laxmi Nagar Delhi.

How to use for loop work in python with example